Jagriti NGO in collaboration with the Amritsar Group of Colleges hosted Amritsar’s biggest book exhibition, naming it as the “Wall of Radiance” 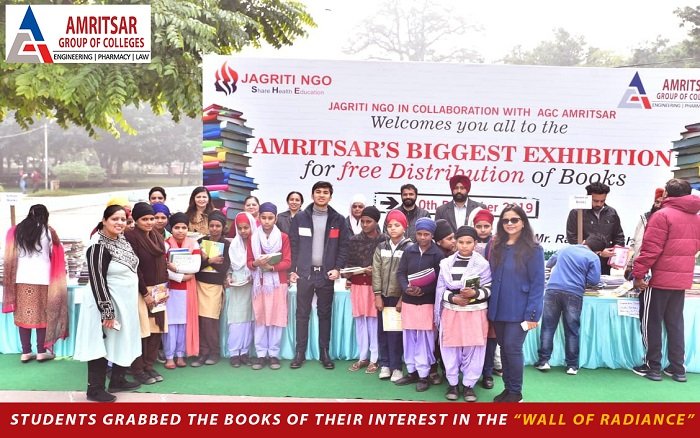 Jagriti NGO is a public welfare society that strives for diminishing illiteracy. After the adoption of the kids by Jagriti, its founding member Mr. Raghav Vashisht went to the various schools of the city to collect the books that people or the students throw into the trash after their promotion to the next class. And, he succeeded in collecting 5000 books in total. Mr. Vashisht with the joint efforts of the faculty and the students of Amritsar Group of Colleges (AGC), Amritsar organized an event named "Wall of Radiance" to distribute those collected books to the needy students. The exhibition was organized in the Company Bagh, Amritsar that witnessed more than 200 students from far and near schools & orphanages, and more than 300 other visitors attended the event. Also, a lot of books were taken away by all of them. Moreover, everyone praised this kind of initiation. The students were seen gladsome after getting the books of their interest and need. Mr. Vashisht now wants this effort to be initiated in the other cities as well and he appeals the public to not to throw their books into the trash instead they can donate them. “The books displayed at the exhibition are of almost all the genres that consist of the storybooks, academic books of school and college level, and a few of diversified interest. It is being hosted for the young and needy students cum readers, who want to study further but due to the lack of the resources, are unable to progress”, he added.
The honorable President of Jagriti NGO, Madam Ragini Sharma, General Secretary Madam Dipti Malhotra, Head Librarian, AGC, Mr. Harinder Singh Sarkaria, and the other members of Jagriti NGO and from team AGC also joined in the exhibition. The students of various schools present in the exhibition were given the refreshments and the whole event ended up successfully.